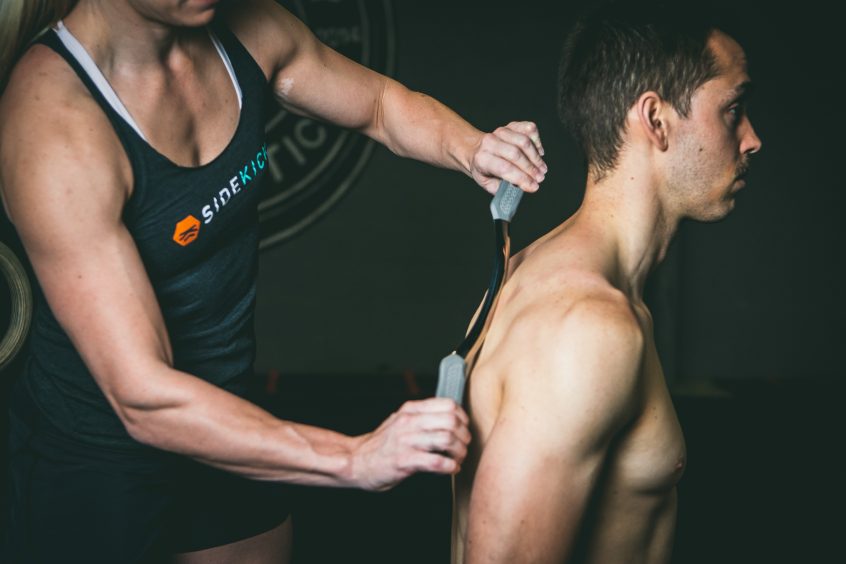 In the constant quest for better muscle performance, athletes and gym goers are now turning towards a technique called muscle scraping. A direct manipulation of muscle tissue to improve blood flow and alleviate adhesions or knots, muscle scraping has been used for thousands of years, but only now is science revealing its potential benefits.

What is Muscle Scraping?

Muscle scraping, also known as Gua Sha or Guasha, is one of the oldest techniques in Chinese medicine, dating back as early as 1300 during the Ming Dynasty. Gua Sha comes from the Chinese words for scraping away (Gua) an energy blockage (Sha).

In the ancient practice, a tool such as a piece of jade stone or animal horn was smoothed, lubricated with oil, and used to scrape across a patient’s skin in one direction. This repeated scraping across the skin was believed to enhance blood circulation to the area that was giving the patient the most trouble. The idea was that the increase in blood flow and circulation would promote healing.

In the modern day, a few things have changed but the technique is the same. Certified practitioners now use a piece of smooth metal or hard plastic tool and that is scraped across or pressed into well-lubricated muscle tissue. The idea is also the same, current practitioners believe that muscle scraping can promote blood flow and increase healing.

Science may finally be catching up to revealing what has been known for hundreds, if not thousands, of years about muscle scraping. This technique may provide the following benefits:

The three most commonly cited benefits of muscle scraping – the ones that have the most scientific evidence to back them – are anti-inflammation, pain relief, and improved range of motion.

Inflammation has become a buzz word in medical news as it is related to poor dietary choices and disease risk. While inflammation is a natural human response towards an injury, chronic inflammation can promote long-term complications.

Studies suggest that the muscle scraping can help to alleviate post-workout inflammation and pain. One study found that subjects who reported chronic neck pain experienced significant improvement after only one week of using muscle scraping.

Studies show that muscle scraping may be able to promote better range of motion through the enhancement of blood circulation, alleviation of scar tissue, and improving tendon and tissue extensibility. It’s also being considered as a safe and natural way to remodel soft tissue following an injury.

Given the positive results of improved blood flow, pain relief, and range of motion, does muscle scraping have any role in muscle performance and your fitness program?

While there are clear implications for post-workout recovery with muscle scraping, can the method be helpful in boosting your intra-workout performance? Studies seems to suggest it can.

One study found that muscle scraping may be beneficial for boosting weightlifting performance. Subjects took part in a seven-week study that following a traditional weightlifting program focusing on compound movements such as barbell squats and deadlifts.

A few things to note about this study: the subjects were all young males, all of whom were healthy and some were experienced in weightlifting. The small sample size also is problematic as we can’t see if these results are applicable to the large scale.

Overall, muscle scraping may be beneficial for muscle performance, but larger scale studies are needed to confirm these benefits for different populations such as female, elderly, and untrained.

Should You Use Muscle Scraping?

No matter your fitness experience or goal, muscle scraping can be a great way to boost performance and recovery while reducing the risk for injury.

Studies show that muscle scraping may help to kickstart important biochemical markers that are needed to boost muscular performance during resistance training. What’s more, it supports cardiovascular function of the heart, potentially improving endurance during a workout.

Muscle scraping can increase blood flow, which could support nutrient uptake and promote muscle repair. Gua sha has also been shown to be effective for increasing range of motion and alleviating pain.

For both intra-workout performance and post-workout recovery, muscle scraping can be a safe and effective method for improvement.

How to Use Muscle Scraping

Muscle scraping can be safely performed in the comfort of your own home using a proper tool such as the Sidekick muscle scraper. We recommend using the muscle scraper whenever you notice a buildup of muscle adhesions (knots) or stiffness in a particular area.

While it is a beneficial procedure, it’s important to remember that muscle scraping should complement a comprehensive chiropractic, physical therapy, or massage therapy program. Here’s how muscle scraping can support these bodywork routines:

Here’s how to perform muscle scraping on yourself or a friend at home:

Step One: Choose which tool is the best for you and purchase a muscle scraping tool.

Step Two: Locate the area of the body that is experiencing the most soreness, tightness, or impingement. An area with a lot of scar tissue is also a great place to start.

Step Three: Apply a light layer of emollient over the treatment area. Remember, using more oil is not necessarily better, and a little goes a long way.

Step Five: Continue muscle scraping for 10 to 15 seconds, then move on to the next area. Again, apply moderate pressure and use unidirectional strokes.

Step Six: After you finish muscle scraping, be sure to drink plenty of water with electrolytes.

Bonus Step: Take a before and after picture of the area. (Don’t forget to tag us @sidekicktool so we can feature you!) If your range of motion is the issue, try taking a video of yourself before and after muscle scraping to see how it has improved.

Do You Use Muscle Scraping to Improve Performance?

If so, did you notice any benefits? If so, which ones? Curious about using muscle scraping? Let us know your questions in the comments below.

David J. Sautter has combined a lifelong passion for writing with over a decade of experience as a NASM-certified personal trainer, fitness-nutrition specialist, and sports-conditioning specialist. David has written hundreds of articles and blog posts as well as dozens of e-books, training guides, and online courses covering a range of health and fitness topics. In his free time, David enjoys going on long hikes, traveling abroad, and writing short stories.

2 Comments on “Muscle Scraping: Can It Improve Muscle Performance?”