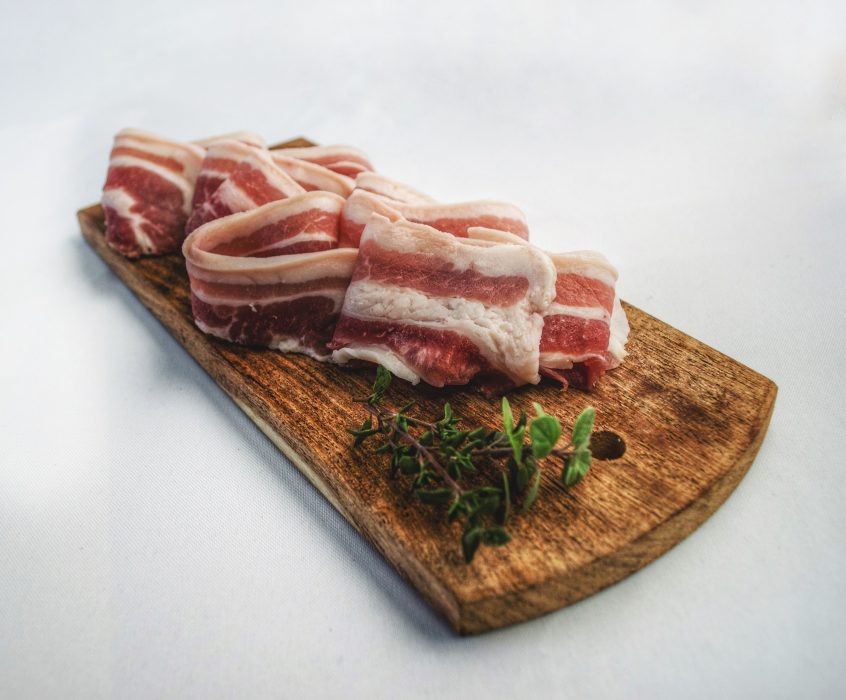 Bacon and healthy eating just don’t go together. It’s common sense, right? After all, bacon is full of fat, it’s greasy and it’s been pumped full of harmful nitrates. What good could it possibly do for you, apart from tasting terrific?

Actually, more than you might think. Poor old pork belly has had a bad rap. In fact, a number of nasty myths have surfaced over the years that reflect badly on this breakfast delicacy. It’s time to do some old fashioned myth busting.

What people say: Sodium nitrates (NO2) and nitrates (NO3) will cause colon and stomach cancer.

What the facts reveal: Nitrates are, indeed, commonly used  to prolong the shelf life of bacon and to prevent the growth of bacteria. Yet your body produces nitrates naturally, most abundantly in saliva. This natural production is far in excess of what you could ever take in through food. Nitrates are also present in the majority of green, leafy vegetables. These are the foods that all nutritionists recommend that we eat more of. (1)

So, why the cancer scare? Well, it’s not nitrates that are the problem, it’s their potential to turn into cancer-inducing nitrosamines. Yet, other compounds present in the bacon, such as Vitamins C and E, combine to greatly lessen the chances of nitrosamine production. (2)

What we say: Don’t worry about the nitrate / cancer naysayers. This one is a red herring.

Myth No.2: Eating bacon fat will make you fat

What people say: Eating the stomach fat of a pig will make you look just like one.

What the facts reveal: The body’s main fat producing macronutrient isn’t fat, it’s carbohydrate (link to article on insulin). That’s because carb consumption triggers insulin release which, in turn, transports excess glucose to our fat cells. Simply eating fat will not make you fat. And, even though bacon contains a lot of saturated fat, this type of fat is not the enemy it’s been made out to be. Naturally occurring saturated fat from animals is stable fat and is the perfect form of fuel for humans. So long as you’re getting enough protein and micronutrients in your diet, saturated fat will not make you fat. Nor will it lead to cardiovascular health problems or raise your cholesterol. We can blame the proposenity for high cholesterol to stress, smoking, processed carbs and excess alcohol – not bacon.

What we say: Bacon fat is prime energy – it will not make you look like Porky.

Myth No. 3: Pigs are filthy creatures, so bacon must be bad for me

What people say: They roll in the mud and do other gross stuff. It’s just common sense that anything that comes from that is going to be unclean and unhealthy.

What the facts reveal: Ask anyone who’s ever owned one, and you’ll find that pigs are actually very clean animals. In fact they are cleaner than most dogs – and smarter too. They never make a mess of their environment and, though they clearly enjoy rolling in the mud, that dirt washes off – it is not going to travel inside of them and affect the quality of their muscle and fat tissue.

What we say: Pigs are among the cleanest of all animals and their muscle and fat is prime nutrition. You should, however, only buy bacon that is organic. This will ensure that the pig was treated well and fed a natural diet while being exposed to natural sunlight, thus increasing the Vitamin D content of that bacon on your plate.

Myth No. 4: Bacon is crammed with harmful preservatives

What people say: Bacon is loaded with all manner of unhealthy preservatives that are toxic to the human body.

What the facts reveal: Non organic bacon is, indeed, pumped with preservatives. You’ll find everything from salt to sugar, sodium phosphate, sodium ascorbate and a whole lot of other nasties that can be poisonous to your body. This type of bacon is heavily processed and comes from factory farm operations. That is why you should give your body some respect and a pay a little more for organic bacon.

You want to be buying unprocessed organic bacon, that has been cured with natural ingredients and that is free of any preservatives.

Bacon is one of life’s little treasures. Don’t feel guilty eating it in moderation. It won’t’ give you cancer, make you fat or put dirt in your body. Neither will it put toxins into your system – so long as you go for quality over cost. The bottom line: relax and enjoy your bacon – just don’t have too many carbs with it.

Steve Theunissen is a former gym owner and personal trainer who lives in New Zealand with his wife, Shelley, and two daughters. For the last decade, Steve has taught literacy to Middle School students. He also runs a fitness boot camp for pre-teens.

One Comment on “Is Bacon Good for You? 4 Common Myths Debunked”