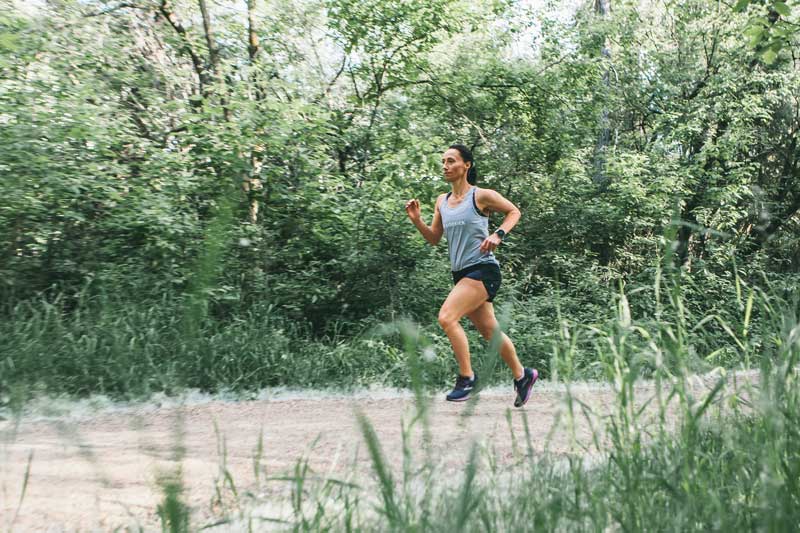 Athletes from all sports go to extreme lengths to improve their performance. When the difference between winning and losing comes down to fractions of meters or seconds, every advantage is worth pursuing, from energy-efficient running shoes to supplements to ultra-light equipment. Some performance-boosting strategies are not even legal, but that doesn’t stop some athletes from using them anyway.

Altitude training has been popular amongst endurance athletes since the 1970s and has gained popularity with recreational athletes too.

What is altitude training?

Altitude training, also known as hypoxic training, started to gain interest after the 1968 Mexico Olympic Games. Athletes noticed that performance in anaerobic events such as the jumps, throws, and sprints improved, while endurance athletes’ performance declined.

For explosive events like jumps and sprints, thinner air is very advantageous. Lower air density means less resistance, and many of the records set during Mexico 1968 remained unbroken for decades.

However, less oxygen means that endurance athletes could not perform as well as they could at sea level. In simple terms, they were starved of oxygen.

This led to a surge in research on the effect of altitude on athletic performance, and scientists determined that training at altitude could give athletes an advantage.

Altitude training involves exercising at least 1,500 meters or 5,000 feet above sea level. At this altitude, the air contains 17.3% oxygen. The higher the altitude, the thinner the air becomes.

There are several different ways athletes use altitude training to boost performance.

Using the live high, train high method, athletes spend all of their time at the prescribed altitude, usually 6,000 to 10,000 feet above sea level. Training so high above sea level requires a reduction in workout duration and intensity. It is often accompanied by a loss of muscle mass and fitness. However, on returning to sea level, performance “bounces back” after another period of training.

For this method, athletes spend most of their non-training time at an altitude of 6,900 to 8,200 feet above sea level and then train at 4,100 feet (1). Living at a high altitude triggers the physiological adaptations that result in increased performance, but, after a period of adaption, without the need to train at a significantly lower level of intensity. With this method, there is less drop off in performance, and athletes are competition ready without having to re-adapt to training at lower altitudes.

The benefits of altitude training take time to develop. Because of this, both of these training methods are typically used for several weeks at a time – four to six weeks being typical. This means that altitude training camps are usually the reserve of elite and full-time athletes and only used in the buildup to an important competition.

Hypoxic chambers mimic the effects of training at altitude. A hypoxic chamber is a sealed room that contains air with a much lower concentration of oxygen, usually around 15.3%, compared to 20.9% at sea level. The oxygen concentration can be adjusted to simulate different levels of altitude.

Some hypoxic chambers can reduce oxygen levels to as low as 10% – simulating the air on the peak of Mt. Kilimanjaro (19,000 feet above sea level). While this oxygen level is too low for true altitude training, this technology is useful for mountain climbers looking to become acclimated to high altitudes.

Hypoxic chambers offer all the advantages of training at high altitudes but are much more accessible and convenient to use. A growing number of sports facilities have these chambers, and many are available for public use.

Some athletes sleep in hypoxic tents. While a hypoxic tent contains more oxygen than high altitude air or training in a hypoxic chamber, the reduction is sufficient to trigger a modest increase in performance, even while you are sleeping.

How does altitude training increase performance?

The human body is a very adaptable organism. When faced with a form of stress, it will do its best to adapt and make that stress easier to deal with. Lifting weights forces your body to build muscle and get stronger, while endurance exercise increases cardiorespiratory function.

Training at altitude triggers several physiological changes that lead to an increase in athletic performance at lower altitudes.

Your blood is made up of several different cells and substances. White blood cells, called leukocytes, protect your body from infection. Platelets, also called thrombocytes, are involved in the clotting process.

Red blood cells, called erythrocytes, are the most abundant blood cells. They contain a protein called hemoglobin, which allows them to transport oxygen.

With more red blood cells, athletes can take in, transport, and utilize more oxygen. When the athlete returns to a lower altitude, their red blood cell count is higher than usual. Combined with an increase in oxygen availability, they can supply their muscles with even more oxygen.

Increased oxygen supply will delay the onset of lactic acid, meaning you can train harder and longer before fatigue sets in. In addition, increased blood oxygen levels will speed up recovery between high-intensity efforts and between workouts.

Hypoxic training may also speed up fat loss. Training with less oxygen increases lactic acid production. This triggers something called EPOC, or excess post-exercise oxygen consumption. In simple terms, EPOC is oxygen debt. Your body has to work extra hard after hypoxic training to repay this oxygen debt. That increased workload leads to an increase in energy (calorie) expenditure (3).

Some unscrupulous athletes use exogenous EPO to elevate their red blood cell count. While the result is the same as training at altitude, this strategy is deemed to be cheating. Uncontrolled EPO use can also be hazardous and could lead to a range of severe side effects, not least stroke, heart attack, and death.

Until relatively recently, EPO use was untraceable. However, the IOC and other sporting bodies have now created tests to detect it. Some athletes still use EPO because the window for detection is relatively short (5).

While altitude training is generally beneficial, it is not without risks. It is impossible to determine how an athlete will respond to training at altitude, which is why most take the time to acclimate gradually and have an “escape plan” to get to lower altitudes should problems arise. Many will also have 24/7 medical support.

The risks associated with altitude training are (6):

These problems are more likely during live high, train high situations. Moving back to a lower altitude should prevent the more serious side effects of hypoxic training.

What about elevation training masks?

While altitude training is undeniably effective for boosting fitness and performance, it is not very accessible. Many athletes do not have the time or the resources to decamp to areas of high altitude for weeks at a time. Hypoxic chambers are more convenient to use but are still not widespread enough that everyone who wants to use one can gain access.

Elevation training masks appear to be a viable alternative to altitude and hypoxic training, but do they work?

Elevation breathing masks fit over your nose and mouth and make breathing more difficult. They reduce airflow and make you work harder to inhale and exhale. These increases exercise intensity because you are unable to breathe normally.

While this does sound a lot like exercising at altitude, elevation training masks do not affect your body the same way that altitude training does. That doesn’t mean they don’t work – it’s just that they increase fitness and performance through different mechanisms.

Elevation masks strengthen your respiratory or breathing muscles – namely the intercostals and diaphragm. Strengthening these muscles makes you a better, more powerful, and more efficient breather. This means you’ll be able to breathe more deeply after a suitable period of training. However, other than the normal adaptions that accompany exercise, using an elevation mask will not have any measurable effect on red blood cell or hemoglobin levels (7).

It’s important to note that, while elevation masks can improve your respiratory efficiency and strength, using one too often could lead to reduced performance. Wearing one means you may not be able to train as long or as hard as usual. This could lead to a decline in things like speed and strength. In short, your cardiovascular fitness will improve, but your muscles may weaken, and you won’t be able to put that increased fitness into action.

Altitude training is the not-so-secret weapon in many athlete’s training armories. It increases fitness and performance by improving the body’s ability to take in, transport, and utilize oxygen. The more oxygen you can supply to your muscles, the longer and harder you’ll be able to perform, and the slower you will fatigue.

In most cases, athletes spend several weeks living and training at altitude, although hypoxic chambers mean that it is possible to experience the benefits of altitude training at sea level. However, such facilities are not commonplace.

Elevation masks can improve your fitness but not in the same way as “real” altitude training. They make breathing harder, which increases respiratory muscle strength but without affecting red blood cell or hemoglobin levels.

If you are looking to increase your performance and have the time to spend a few weeks at altitude, living and training at 5,000 feet or above will definitely help. However, it is not without drawbacks, and you should only do this if the risk is worth the benefit. It’s also important to note that the benefits of altitude training are relatively short-lived, and will diminish within a few weeks.

5. BBC: How I became a drug cheat athlete to test the system

7. PubMed: Effects of respiratory muscle training on performance in athletes: a systematic review with meta-analyses
https://www.ncbi.nlm.nih.gov/pubmed/22836606

Patrick Dale is an ex-British Royal Marine, gym owner, and fitness qualifications tutor and assessor. In addition, Patrick is a freelance writer and also authored three fitness and exercise books, dozens of e-books, thousands of articles, and several fitness videos. He’s not just an armchair fitness expert; Patrick practices what he preaches! He has competed at a high level in several sports, including rugby, triathlon, rock climbing, trampolining, powerlifting, and, most recently, stand up paddleboarding. When not lecturing, training, researching, or writing, Patrick is busy enjoying the sunny climate of Cyprus, where he has lived for the last 20-years.